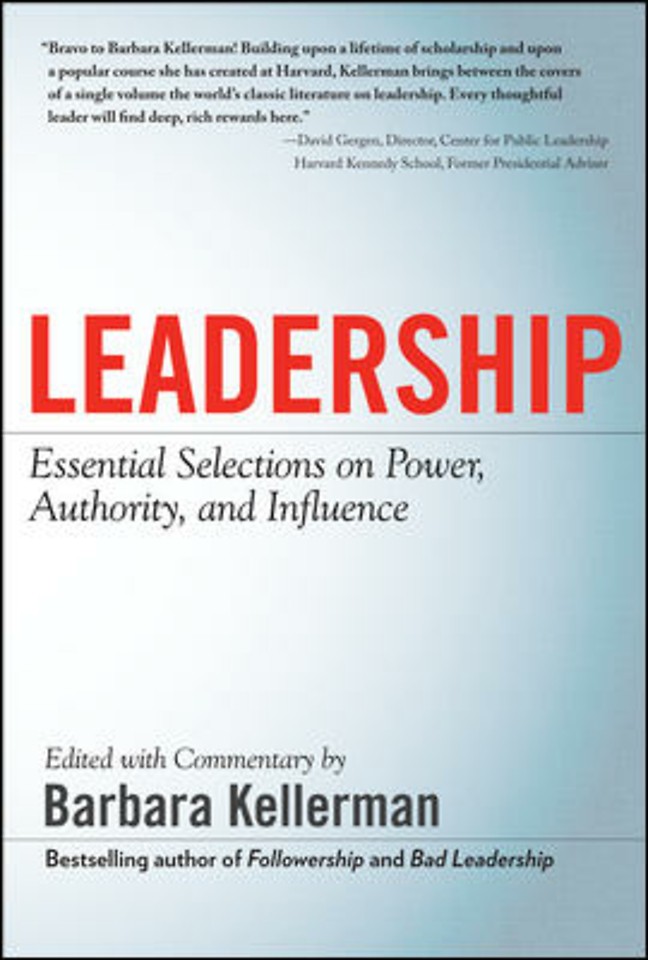 "Bravo to Barbara Kellerman! Building upon a lifetime of scholarship and upon a popular course she has created at Harvard, Kellerman brings between the covers of a single volume the world's classic literature on leadership. Every thoughtful leader will find deep, rich rewards here."
David Gergen, Director, Center for Public Leadership Harvard Kennedy School, Former Presidential Adviser

Bolster your leadership literacy and improve your performance as a leader or manager.

Instead, Leadership is a concise yet expansive collection of great leadership literature that has stood the test of time. As Kellerman makes clear in her extensive, authoritative commentaries, every single selection has had, and continues to have, an impact on how and what we think about what it means to lead. And every single one has had an impact on leadership as an area of intellectual inquiry as well as on the course of human history.

Part I of Leadership consists of writings about leadership:Lao Tzu on how to lead lightly Plato on tyrants and philosopher kings Machiavelli on the preservation of power

In Part II, you'll find examples of what Kellerman uniquely identifies as writing as leadership—works and words that thanks to their persuasiveness and power, changed the world:Thomas Paine Common Sense Elizabeth Cady Stanton "Declaration of Sentiments" Rachel Carson Silent Spring

Part III presents leaders in action individuals who seized the moment to captivate, motivate, and lead with their singular personal power to persuade:Abraham Lincoln on war and redemption Elizabeth I on gender and power Vaclav Havel on the power of the powerless

Barbara Kellerman is the James MacGregor Burns Lecturer in Public Leadership at Harvard University's John F. Kennedy School of Government. Her writing has appeared in The New York Times, The Washington Post, The Boston Globe, The Los Angeles Times, and Harvard Business Review, and she has appeared on CBS, NBC, NPR, and CNN. She is author and editor of many books on leadership, most recently Bad Leadership and Followership. Kellerman is ranked by Forbes.com as among the "Top 50 Business Thinkers" (2009), and by Leadership Excellence in the top 15 of 100 "best minds on leadership" (2008-2009).