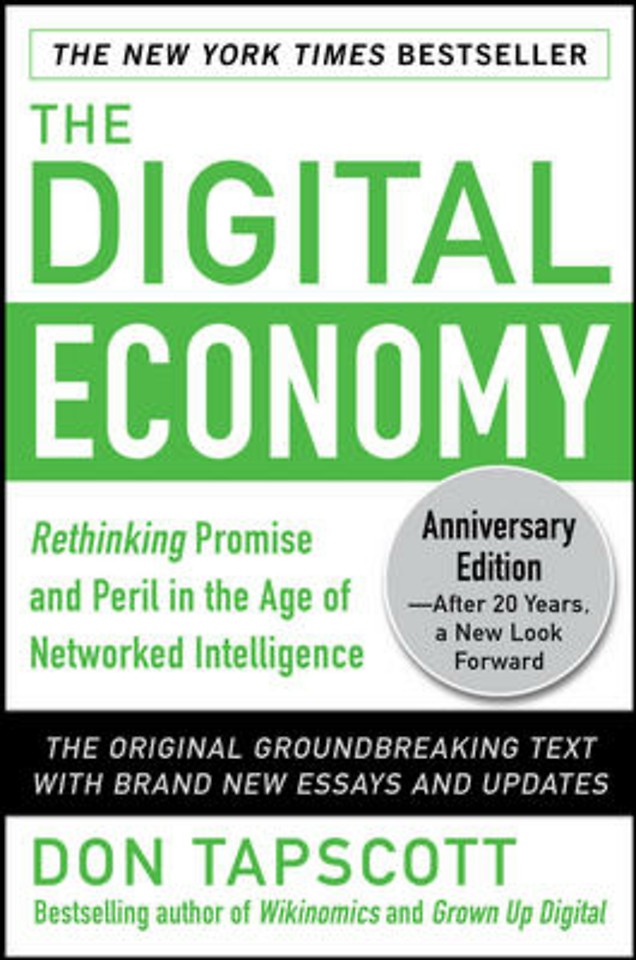 “Twenty years of hindsight prove how deeply Tapscott understood the impact the Internet would have on the way we live, work, play and learn. This important book, now updated, is just as relevant today as it was then.”
John Chambers, Chairman and CEO, CiscoWith a new foreword by Eric Schmidt, Chief Executive of Google

Two decades ago, The Digital Economy changed the way the world thought about the Web and Internet. While everyone else was in awe of “websites” and "dot coms," Don Tapscott was among the first people to argue that the Internet would fully transform the nature of business and government. It goes without saying that his predictions were spot on.

Now, in this new edition of his classic work, the New York Times bestselling author provides topical updates with a sweeping new analysis of how the Internet has changed business and society in the last 20 years, covering:Natural frictions between present-day Industrial Capitalism and the Digital EconomyThe radical effects of the Internet on traditional corporate structures and systemsDramatic changes in business collaboration and culture thanks to social mediaThe rise of web-based analytics and how they have transformed business functionsGovernment transparency, citizen empowerment, and the creation of public valueTeaching and learning—revolutionary developments driven by digital content

When Tapscott was writing the original edition in 1994, he was living in a world where Netscape had been just introduced as go-to browser, websites didn’t do transactions, dial-up was the only way to get online, and mobile phones sightings were rare. Google, YouTube, eBay, Facebook, Twitter? They didn’t exist.

Preserving all the original text as it appeared 20 years ago, this new edition includes detailed essays ending each chapter—Tapscott’s highly informed reflections on his predictions, along with new forecasts of where the digital world is headed.

Praise for the new edition of The Digital Economy

“1994 was a good year. Netscape Navigator and The Digital Economy. With this anniversary edition, Tapscott provides lucid insights for the next stage of these amazing times.”
Marc Andreessen, Co-founder and General Partner, Andreessen Horowitz

“Brilliant. Governments can learn from The Digital Economy how to democratize access to prosperity, minimize social and economic divides and transform government and democracy for the 21st Century.”
Enrique Peña Nieto, President of Mexico

“We’re now into three decades of terrific insights and analysis from Don Tapscott about the digital revolution! Read this book!”
Ajay Banga, President and CEO, Mastercard

PART I Thriving In A New Economy