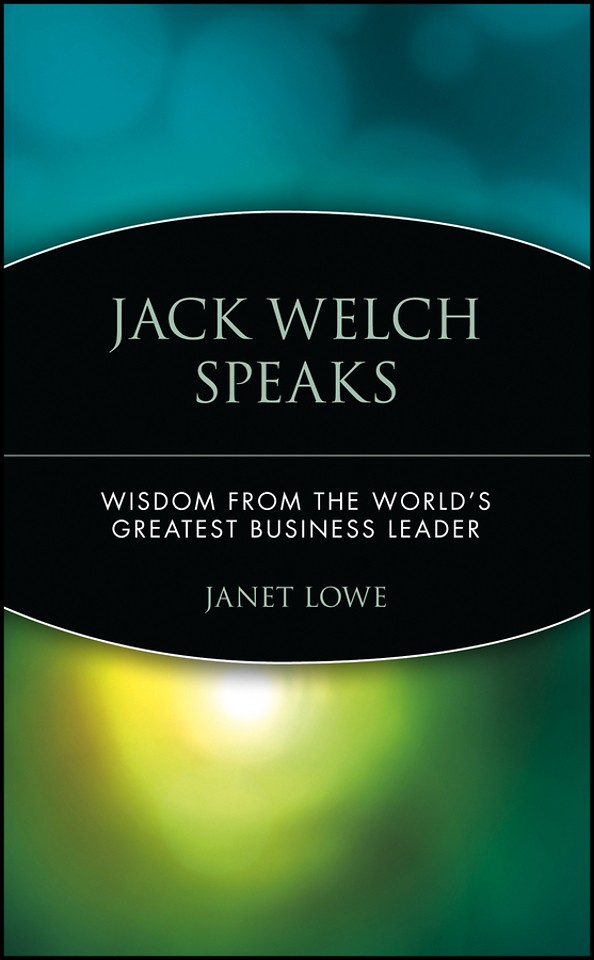 The world tries to keep up when JACK WELCH SPEAKS:

"Jack Welch has long been one of my heroes. When you read this book you will understand why." –Warren Buffett Chairman, Berkshire Hathaway.

"Jack Welch is a management genius who attacks life as he does business–with unconventional flair, a restless intellect, and no tolerance for phonies. And I′d say that even if he weren′t my boss!" –Tom Brokaw Anchor and Managing Editor, NBC

"Jack Welch describes himself as ′just a man in a room.′ Janet Lowe takes us into this room by letting the man speak for himself. Through his own words, it becomes clear why he is listened to and emulated all over the world. Big man, big room." –Sam Nunn Former U.S. Senator; Partner, King and Spalding.

"All too often, the journalistic adulation heaped upon business leaders is misplaced or vastly overstated. In the case of Welch, he′s even better than his press." –Larry Bossidy Chairman and CEO, Allied Signal Inc.

"Jack Welch Speaks shows business at its most fascinating. It gives the reader a valuable insight into the mind and personal philosophy of one of America′s keenest, most effective business leaders." –Ely Callaway Founder and Chairman, Callaway Golf.

"The gold standard against which other CEOs are measured." –BusinessWeek.

He is one of the most praised, perhaps the most feared, and certainly one of the most confounding and controversial bosses in America–a complex, intensely private man, revered as the manager′s manager. As Chairman and Chief Executive Officer of General Electric, Jack Welch has been at the forefront of the reconstruction of American industry. From the moment he assumed his position 16 years ago, Welch sought dramatic and swift change. He quickly realized the demands of the new, global, high–tech environment, and met the challenge with decisive action and, in the opinion of many, ruthless determination. He broadened corporate America′s vocabulary with words that still strike terror in the hearts of many an employee: restructuring, downsizing, rightsizing. In the process, Jack Welch turned an aging, albeit highly respected and historic, business icon into what is considered by many today to be the best managed company in the world and, above all, one of the most profitable.

Now, Janet Lowe, author of the bestselling Warren Buffett Speaks, presents in Welch′s own words the insights, vision, passions, and persuasions of a legendary leader. Here′s just a sample of what you′ll find inside:

∗ "As I went to bigger pieces of GE, I found bigger bureaucracies, layers and all that stuff and it wasn′t friendly. Business was very serious–turf–boxes. Business isn′t that. Business is ideas and fun and excitement and celebrations, all those things."

∗ "When you′re running an institution, you′re always scared at first. You′re afraid you might break it."

∗ "If someone tells me ′I′m working 90 hours a week,′ I say, ′You′re doing something terribly wrong.′ I go skiing on the weekend, I go out with my buddies on Friday and party. You′ve got to do the same or you′ve got a bad deal."

∗ "Speed is everything. It is the indispensable ingredient in competitiveness. Speed keeps business and people young. It′s addictive, and it′s a profoundly American taste we need to cultivate."

In One Decade: From Letterman to Seinfeld.

Qualities of a Leader: Welch Style.

The Fabric of Leadership.