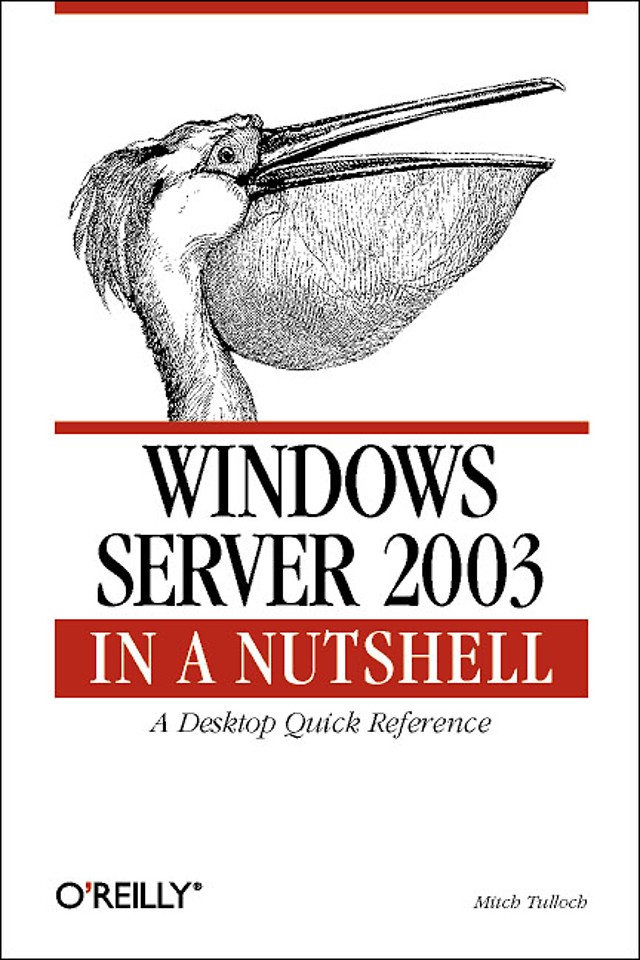 So you've decided to adopt Windows Server 2003? Whether you're migrating from Windows 2000 or directly from Windows NT, 'Windows Server 2003 in a Nutshell' is packed with the detailed information that you will need as you administer this OS. To-the-point chapters on migration highlight important new features such as enhancements to Active Directory, shadow volume copies, and Windows Update. Even better for experienced NT and 2000 admins are details about where Microsoft put familiar options, helping you quickly get oriented to the new platform.

Those of you familiar with NT or Windows 2000 are well beyond the tutorial stage. Windows Server 2003 in a Nutshell delivers a no-fluff guide with two alphabetical references, one for the GUI and one for the command-line. The Task Map chapter lets you find look up a task (such as "troubleshooting startup issues") to find appropriate topics in the references. Once you know where you're going, the book offers numerous step-by-step procedures in highly condensed form. This quick lookup reference is ideal for administration and deployment, as well as deeper issues such as planning, configuring, and troubleshooting.

The GUI chapter is organized by topic according to major themes of Windows Server 2003 administration, providing one-stop shopping for busy admins. For example, if you want to find out about Active Directory and how to manage it, you'd begin by turning to Active Directory. Each topic begins with a description of basic concepts, followed by a description of tools (such as Microsoft Management Console snap-ins) used to administer the feature, instructions on how to perform common or important administrative tasks, and notes detailing subtle points and potential gotchas.

Windows Server 2003 offers greatly enhanced command-line administration, and the command reference prominently highlights the many new commands in this release. Dozens of new commands and scripts have been added for administration of Active Directory, disks, event logs, Group Policy, IIS, network diagnostics, the pagefile, printers, processes, shared folders, and the Registry. The result is a Windows operating system platform that now rivals Unix in its ability to support command-line and scripted administration.

Microsoft has introduced the right server for a world now dominated by highly distributed systems and web-based server applications, and O'Reilly has written a book that will earn a prominent place on administrators' desk tops.

Mitch Tulloch is a trainer, consultant, and author living in Winnipeg, Canada. In addition to his Nutshell books for O'Reilly listed below, Mitch is also the author of the Microsoft Encyclopedia of Networking and Microsoft Encyclopedia of Security, both from Microsoft Press, and a string of best-selling books on IIS from Osborne/McGraw-Hill. If you're interested you can find out more about Mitch on his website www.mtit.com. In addition to his O'Reilly weblog, Mitch also maintains a "techblog" at mitchtulloch.blogspot.com containing random thoughts, ideas, suggestions, tips, and resources for network and system administrators.