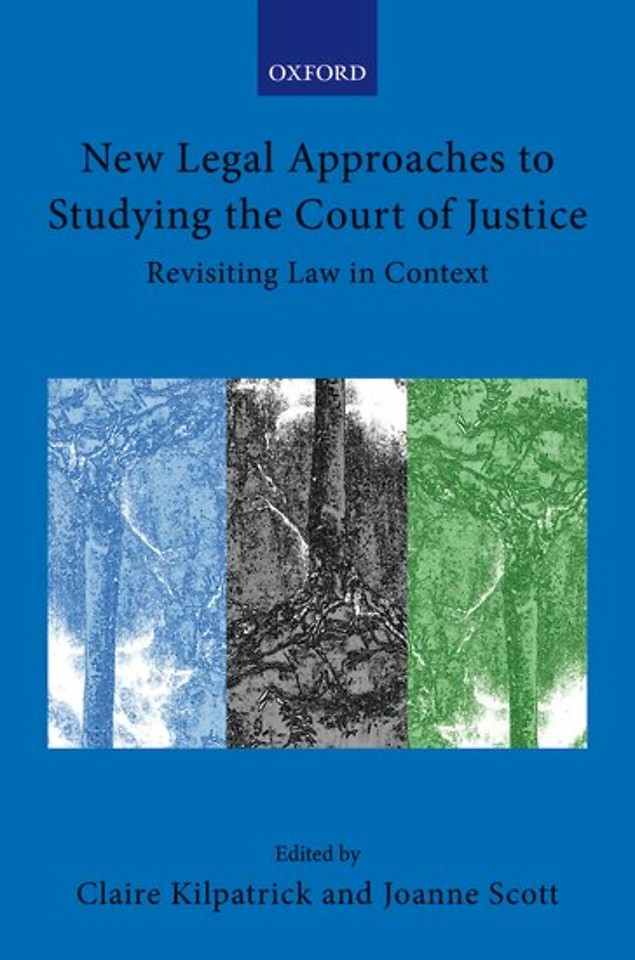 Claire Kilpatrick is Professor of International and European Labour and Social Law at the European University Institute and Co-Director of the Academy of European Law at the EUI.

New Legal Approaches to Studying the Court of Justice

At the beginning of 2015, the Court of Justice opened its archives, which created a new and challenging primary source for those studying the Court of Justice: the dossiers de procédure which contain much more than the contemporary documents published by the Court. This volume includes five chapters which analyse the activities of the Court of Justice from a highly diverse range of non-doctrinal perspectives. However, they also highlight significant new developments at the Court itself which attract attention and deserve analysis.

Thus, the idea behind this volume is to make available new tools and approaches through which the activities of the Court of Justice can be studied. It shows a more intense engagement with scholars across disciplines to reflect on law and courts, with the Court of Justice as a central focus, and new methods (such as network citation analysis) and sources (such as the Court's archives) being discovered and developed.

It also shows a more intense and deeply knowledgeable engagement with EU law and the Court of Justice by non-legal scholars, such as the new sociologies and histories of the Court of Justice. These and other new approaches have spawned productive and ongoing conversations across disciplines.

Claire Kilpatrick is Professor of International and European Labour and Social Law at the European University Institute and Co-Director of the Academy of European Law at the EUI. She is also the EUI's Dean of Graduate Studies. Before coming to the EUI in 2011, she worked at LSE and before that at Cambridge University. Her interests lie mainly in the law and policy construction of Social Europe, especially the EU's roles. A focus of her recent work is EMU and Social Europe with a particular focus on sovereign debt loan arrangements and legal challenges to those arrangements from those within debtor EU states. Professor Kilpatrick is involved in two research projects at present concerning 'Equality Law in Europe - A New Generation' and 'The Court of Justice in the Archives'. These projects are hosted by the Academy of European Law at the EUI and involve the participation of many EUI researchers.

Joanne Scott is Professor of European Law and Co-Director of the Academy of European Law at the European University Institute. She is currently on leave from University College London, where she taught from 2005 to 2017. Before that she taught at the University of Cambridge, Queen Mary University of London and the University of Kent. Her research interests lie in the areas of environmental law and climate change law, EU extraterritoriality, new modes of EU governance and the relationships between different legal orders. Among her recent publications is a co-edited book (with Marise Cremona) on EU Law Beyond EU Borders: The Extraterritorial Reach of EU Law (2019). She was elected as a Fellow of the British Academy in 2013 and a Fellow of the Royal Society of Edinburgh in 2012. Along with Claire Kilpatrick and Marise Cremona, she is currently involved in the Academy research project exploring 'The Court of Justice in the Archives'. This project is funded by the EUI Research Council.

New Legal Approaches to Studying the Court of Justice