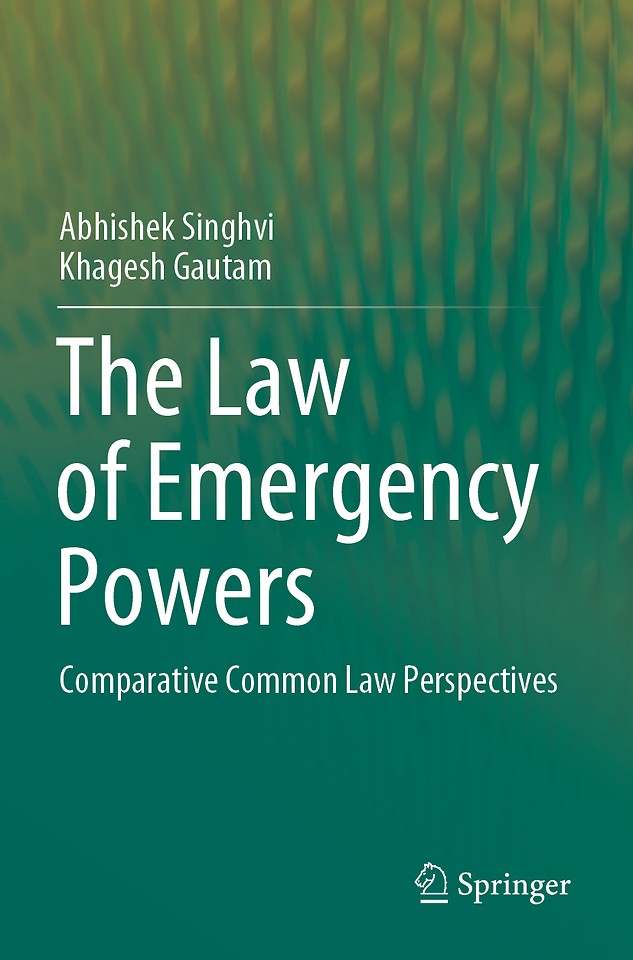 The Law of Emergency Powers

This book presents a comprehensive legal and constitutional study of emergency powers from a comparative common law perspective. It is one of very few comparative studies on three jurisdictions and arguably the first one to explore in detail various emergency powers, statutory and common law, constitutional and statutory law, martial law and military acting-in-aid of civil authority, wartime and peacetime invocations, and several related and vital themes like judicial review of emergency powers (existence, scope and degree). The three jurisdictions compared here are: the pure implied common law model (employed by the UK), implied constitutional model (employed by the USA) and the explicit constitutional model (employed by India). The book’s content has important implications, as these three jurisdictions collectively cover the largest population within the common law world, and also provide maximum representative diversity. The book covers the various positions on external emergencies as opposed to internal emergencies, economic/financial emergencies, and emergent inroads being made into state autonomy by the central or federal governments, through use of powers like Article 356 of the Indian Constitution.

By providing a detailed examination of the law and practice of emergency powers, the book shares a wealth of valuable insights. Specific sub-chapters address questions like – what is the true meaning of ‘martial law’; who can invoke ‘martial law’; when can it be invoked and suspended; what happens when the military is called in to aid civilian authorities; can martial law be deemed to exist or coexist when this happens; what are the limits on state powers when an economic emergency is declared; and, above all, can, and if so, when and how should courts judicially review emergency powers? These and several other questions are asked and answered in this study. Though several checks and constraints have been devised regarding the scope and extent of ‘emergency powers,’ these powers are still prone to misuse, as all vast powers are. A study of the legal propositions on this subject, especially from a comparative perspective, is valuable for any body politic that aspires to practice democracy, while also allowing constitutionally controlled aberrations to protect that democracy.

Chapter 1 – The Concept of Emergency Powers in History and Political Thought: Greek, Roman, and Indian paradigms

v.        Some additional effects of use of emergency powers

vi.      The decline of the dictatorship

Chapter 2 – Martial Law: A Comparative Analysis of the USA, the UK, and India

iii.      State of Insurrection and State of War

iv.      Historical Instances of Use of Force

c.       Necessity and Effect of Proclamations

viii.  Suspension of the writ of Habeas Corpus

a.       Martial Law and Suspension of Writ of Habeas Corpus differentiated

iii.      Can Martial Law be proclaimed under article 34?

ii.        Some instances of use of the military in aid of civil authority

iii.      Distinctions between martial law and use of military in aid of civil authority

b.      False arrest and imprisonment

v.        Judicial review of actions of Guard in other situationsvi.      Use of force by the Federal Government: The Debs Principle

III.         Military Acting in Aid of Civil Authority in UK

i.          Distinction between martial law and military acting in aid of civil authority

ii.        Historical evolution and current status of the civil decision to deploy military

iii.      Judicial review and some other issues

IV.         India: No direct comparative jurisprudence exists though some principles are summarized

III.         Financial Independence of the Judiciary

i.          Judicial Salaries and Judicial Independence

ii.        Judicial Salaries and the Question of Independence in the United StatesIV.         Financial Independence of Judiciary under the Indian Constitution

V.           Judicial Review of Reduction of Judicial Salaries during an Economic Emergency

I.               Historical overview of Emergency Powers in Pre-Indepenent India

iii.      Changes in Emergency Provisions During and After 1975

a.       Proclamation of Emergency

b.      Effects of Emergencyv.        Post-Independence Emergencies

iv.      Some legal aspects of President’s Rule in India

a.       Role and Status of President and Governor during an article 356 Proclamationb.      Duration of Effects of Action under an article

c.       Legality of suspension of Assembly

The Law of Emergency Powers