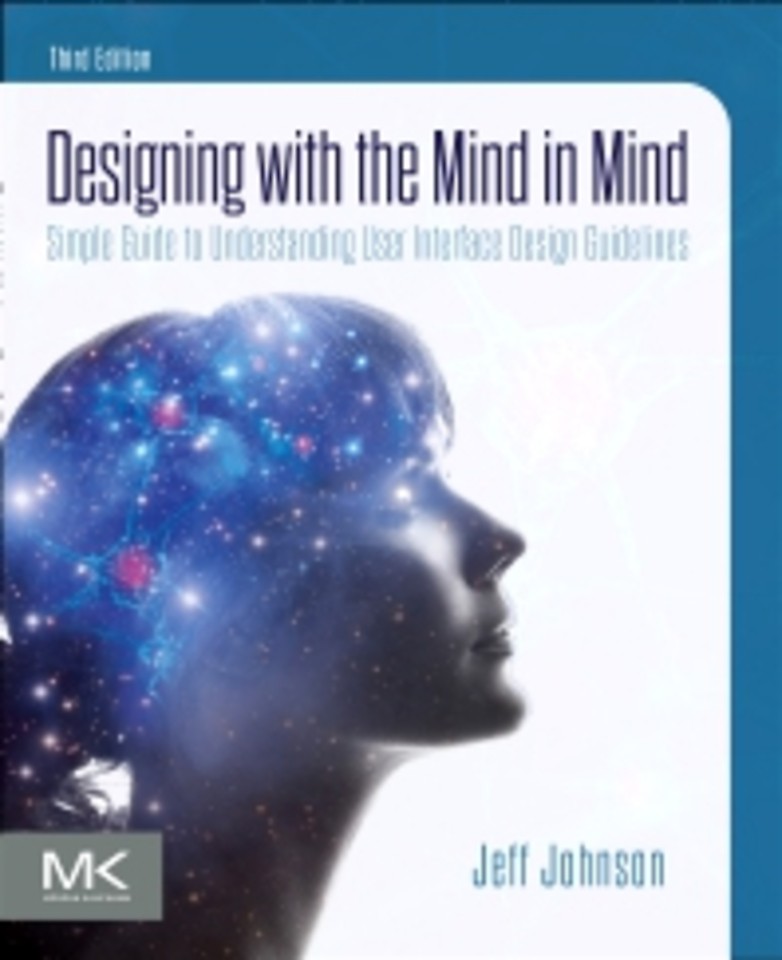 Jeff Johnson is an Assistant Professor of Computer Science at the University of San Francisco.

Designing with the Mind in Mind

User interface (UI) design rules and guidelines, developed by early HCI gurus and recognized throughout the field, were based on cognitive psychology (study of mental processes such as problem solving, memory, and language), and early practitioners were well informed of its tenets. But today practitioners with backgrounds in cognitive psychology are a minority, as user interface designers and developers enter the field from a wide array of disciplines.

HCI practitioners today have enough experience in UI design that they have been exposed to UI design rules, but it is essential that they understand the psychological basis behind the rules in order to effectively apply them. In Designing with the Mind in Mind, best-selling author Jeff Johnson provides designers with just enough background in perceptual and cognitive psychology that UI design guidelines make intuitive sense rather than being just a list of rules to follow.

Key Features
- Provides an essential source for user interface design rules and how, when, and why to apply them
- Arms designers with the science behind each design rule, allowing them to make informed decisions in projects, and to explain those decisions to others
- Equips readers with the knowledge to make educated tradeoffs between competing rules, project deadlines, and budget pressures
- Completely updated and revised, including additional coverage in such areas as persuasion, cognitive economics and decision making, emotions, trust, habit formation, and speech UIs

Jeff Johnson is an Assistant Professor of Computer Science at the University of San Francisco. He is also a principal at Wiser Usability, a consultancy focused on elder usability. After earning B.A. and Ph.D. degrees from Yale and Stanford, he worked as a UI designer, implementer, manager, usability tester, and researcher at Cromemco, Xerox, US West, Hewlett-Packard, and Sun. He has taught at Stanford, Mills, and the University of Canterbury. He is a member of the ACM SIGCHI Academy and a recipient of SIGCHI's Lifetime Achievement in Practice Award. He has authored articles on a variety of topics in HCI, as well as the books GUI Bloopers (1st and 2nd eds.), Web Bloopers, Designing with the Mind in Mind (1st and 2nd eds.), Conceptual Models: Core to Good Design (with Austin Henderson), and Designing User Interfaces for an Aging Population (with Kate Finn).

1. Our Perception is Biased
2. Our Vision is Optimized to See Structure
3. We Seek and Use Visual Structure
4. Our Color Vision is Limited
5. Our Peripheral Vision is Poor
6. Reading is Unnatural
7. Our Attention is Limited; Our Memory is Imperfect
8. Limits on Attention Shape Our Thought and Action
9. Recognition is Easy; Recall is Hard
10. Learning from Experience and Performing Learned Actions are Easy; Problem Solving and Calculation are Hard
11. Many Factors Affect Learning
12. Human Decision-Making is Rarely Rational
13. Our Hand-Eye Coordination Follows Laws
14. We Have Time Requirements

Designing with the Mind in Mind