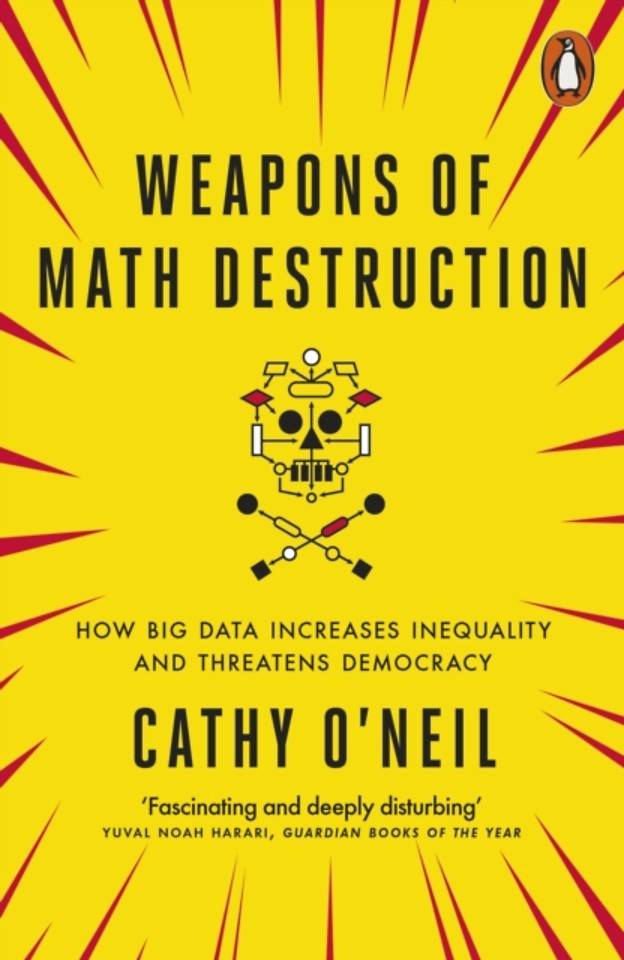 Cathy O’Neil is a data scientist and author of the blog mathbabe.org. She earned a Ph.D.

A former Wall Street quant sounds an alarm on the mathematical models that pervade modern life — and threaten to rip apart our social fabric.

We live in the age of the algorithm. Increasingly, the decisions that affect our lives—where we go to school, whether we get a car loan, how much we pay for health insurance—are being made not by humans, but by mathematical models. In theory, this should lead to greater fairness: Everyone is judged according to the same rules, and bias is eliminated.

But as Cathy O’Neil reveals in this urgent and necessary book, the opposite is true. The models being used today are opaque, unregulated, and uncontestable, even when they’re wrong. Most troubling, they reinforce discrimination: If a poor student can’t get a loan because a lending model deems him too risky (by virtue of his zip code), he’s then cut off from the kind of education that could pull him out of poverty, and a vicious spiral ensues. Models are propping up the lucky and punishing the downtrodden, creating a “toxic cocktail for democracy.” Welcome to the dark side of Big Data.

Tracing the arc of a person’s life, O’Neil exposes the black box models that shape our future, both as individuals and as a society. These “weapons of math destruction” score teachers and students, sort résumés, grant (or deny) loans, evaluate workers, target voters, set parole, and monitor our health.

O’Neil calls on modelers to take more responsibility for their algorithms and on policy makers to regulate their use. But in the end, it’s up to us to become more savvy about the models that govern our lives. This important book empowers us to ask the tough questions, uncover the truth, and demand change.

“Weapons of Math Destruction is the Big Data story Silicon Valley proponents won’t tell… [It] pithily exposes flaws in how information is used to assess everything from creditworthiness to policing tactics… A thought-provoking read for anyone inclined to believe that data doesn’t lie.” —Reuters

“O’Neil is an ideal person to write this book. She is an academic mathematician turned Wall Street quant turned data scientist who has been involved in Occupy Wall Street and recently started an algorithmic auditing company. She is one of the strongest voices speaking out for limiting the ways we allow algorithms to influence our lives… While Weapons of Math Destruction is full of hard truths and grim statistics, it is also accessible and even entertaining. O’Neil’s writing is direct and easy to read—I devoured it in an afternoon.” —Scientific American

“O’Neil has become [a whistle-blower] for the world of Big Data… [in] her important new book… Her work makes particularly disturbing points about how being on the wrong side of an algorithmic decision can snowball in incredibly destructive ways.” —Time

“In this simultaneously illuminating and disturbing account, [O’Neil] describes the many ways in which widely used mathematic models—based on ‘prejudice, misunderstanding, and bias’—tend to punish the poor and reward the rich… She convincingly argues for both more responsible modeling and federal regulation. An unusually lucid and readable look at the daunting algorithms that govern so many aspects of our lives.” —Kirkus Reviews (starred)

“This taut and accessible volume, the stuff of technophobes’ nightmares, explores the myriad ways in which largescale data modeling has made the world a less just and equal place. O’Neil speaks from a place of authority on the subject… Unlike some other recent books on data collection, hers is not hysterical; she offers more of a chilly wake-up call as she walks readers through the ways the ‘big data’ industry has facilitated social ills such as skyrocketing college tuitions, policing based on racial profiling, and high unemployment rates in vulnerable communities… eerily prescient.” —Publishers Weekly

“Many algorithms are slaves to the inequalities of power and prejudice. If you don’t want these algorithms to become your masters, read Weapons of Math Destruction by Cathy O’Neil to deconstruct the latest growing tyranny of an arrogant establishment.” —Ralph Nader, author of Unsafe at Any Speed

“In this fascinating account, Cathy O’Neil leverages her expertise in mathematics and her passion for social justice to poke holes in the triumphant narrative of Big Data. She makes a compelling case that math is being used to squeeze marginalized segments of society and magnify inequities. Her analysis is superb, her writing is enticing, and her findings are unsettling.” —Danah Boyd, founder of Data & Society and author of It’s Complicated

“Next time you hear someone gushing uncritically about the wonders of Big Data, show them Weapons of Math Destruction. It’ll be salutary.” —Felix Salmon, Fusion

Cathy O’Neil is a data scientist and author of the blog mathbabe.org. She earned a Ph.D. in mathematics from Harvard and taught at Barnard College before moving to the private sector, where she worked for the hedge fund D. E. Shaw. She then worked as a data scientist at various start-ups, building models that predict people’s purchases and clicks. O’Neil started the Lede Program in Data Journalism at Columbia and is the author of Doing Data Science. She is currently a columnist for Bloomberg View.

1. Bomb parts: What is a Model?
2. Shell schoked: My journey of disillusionment
3. Arms race: Going to college
4. Propaganda machine: Online advertising
5. Civilian casualties: Justice in the Age of Big Data
6. Ineligible to serve: Getting a job
7. Sweating bullets: On the job
8. Collatoral damage: Landing credit
9. No safe zone: Getting insurance
10. The targeted citizen: Civc life