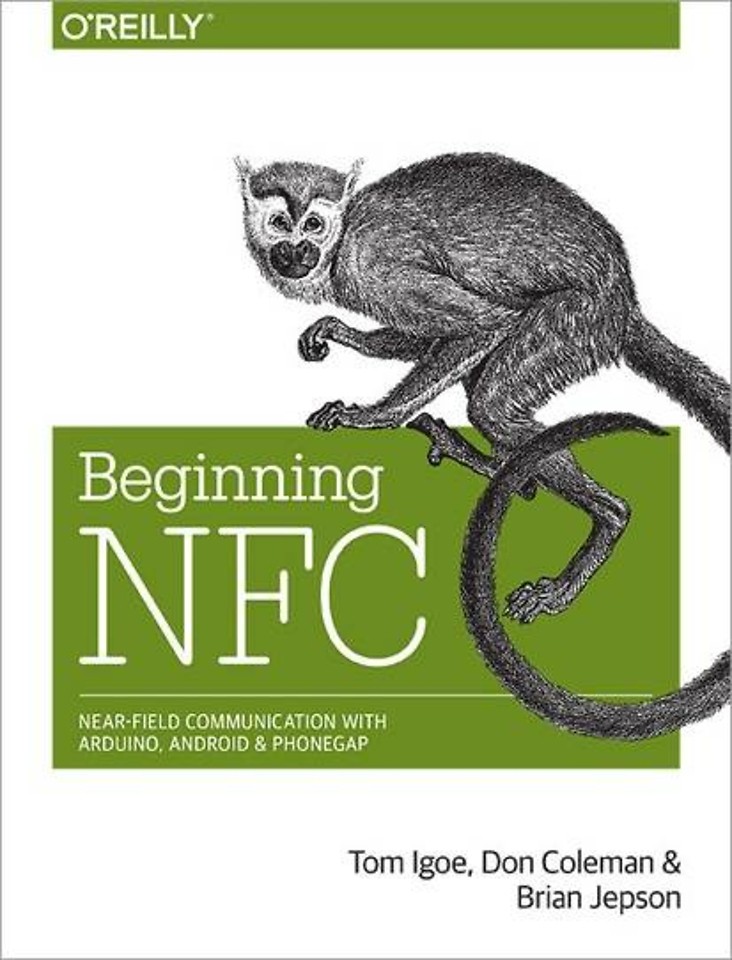 Jump into the world of Near Field Communications (NFC), the fast-growing technology that lets devices in close proximity exchange data, using radio signals. With lots of examples, sample code, exercises, and step-by-step projects, this hands-on guide shows you how to build NFC applications for Android, the Arduino microcontroller, and embedded Linux devices.

You’ll learn how to write apps using the NFC Data Exchange Format (NDEF) in PhoneGap, Arduino, and node.js that help devices read messages from passive NFC tags and exchange data with other NFC-enabled devices. If you know HTML and JavaScript, you’re ready to start with NFC.

Tom Igoe teaches courses in physical computing and networking at the Interactive Telecommunications Program in the Tisch School of the Arts at New York University. In his teaching and research, he explores ways to allow digital technologies to sense and respond to a wider range of human physical expression. He is the author of Making Things Talk and Getting Started with RFID, and he co-authored Physical Computing: Sensing and Controlling the Physical World with Computers with Dan O’Sullivan. He is a contributor to MAKE magazine and a co-founder of the Arduino open source micro-controller project. He hopes someday to visit Svalbard and Antarctica.

Don Coleman is a lifelong engineer who has come full circle; from mechanical to software and now to hardware, bridging the gap between all disciplines. Along the way he has created systems varying from environmental monitoring mesh networks to wearable tech. Don is a seasoned PhoneGap developer embracing it since inception and has spoken across the country about the benefits and advantages of using PhoneGap. A true maker at heart - everything in this book, is running somewhere in his home. As the Director of Consulting for Chariot Solutions, a software consulting company near Philadelphia, PA, he works with teams and clients to reinvent their existing technology and lay the groundwork for the future.

Brian Jepson is a book editor with MAKE, a hacker, and co-organizer of Providence Geeks and the Rhode Island Mini Maker Faire. He’s also a geek-at-large for AS220, a nonprofit arts center in Providence, Rhode Island. AS220 gives Rhode Island artists uncensored and unjuried forums for their work and also provides galleries, performance space, fabrication facilities, and live/work space.

1. Introduction
2. NFC and RFID
3. Getting Started with PhoneGap and the PhoneGap-NFC Library
4. Introducing NDEF
5. Listening for NDEF Messages
6. An NFC Application in Practice
7. Introduction to Arduino and NFC
8. Peer-to-Peer Exchange
9. NFC on Embedded Systems