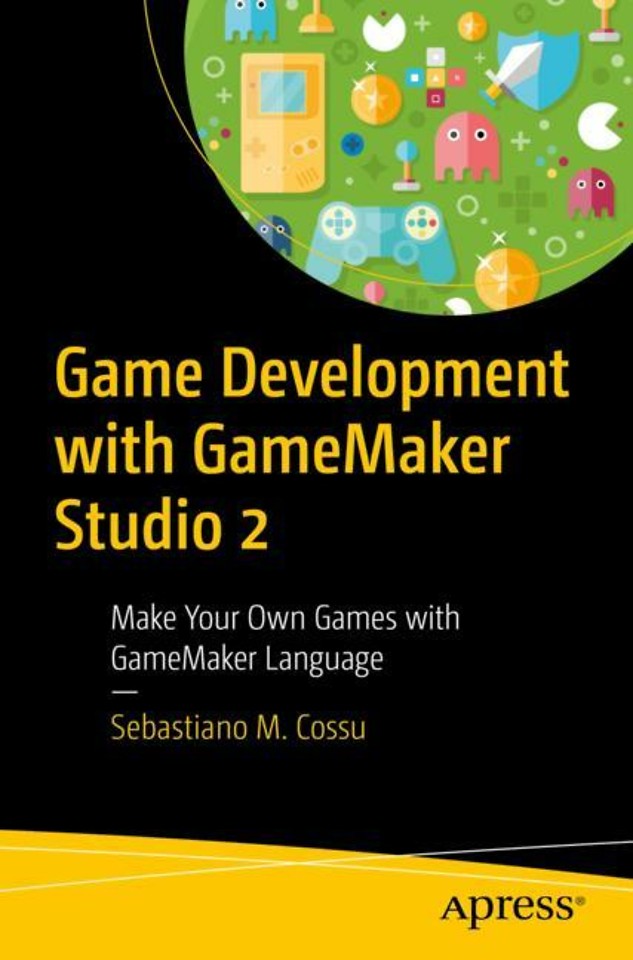 Make Your Own Games with GameMaker Language

Game Development with GameMaker Studio 2 covers all aspects of game design and development from the initial idea to the final release, using an award-winning game engine. You learn how to create real-world video games based on classic and legendary video game genres. Each game project introduces and explains concepts of game development and design and coding principles, allowing you to build a wide set of skills while creating an exciting portfolio to kick-start a career in game development.

Author Sebastiano Cossu teaches you to design levels in your games, draw sprites to populate your virtual worlds, program game objects for interaction with the player, incorporate custom music and sound effects, build GUIs for your menus and game interfaces, and support keyboard, mouse, and gamepad controls in your projects. He shows you how to build cross-platform games to run on all desktop platforms (Windows, Linux, Mac OS) and publish them on the most popular game stores such as Steam, GOG, Humble Store, and Itch.io.

Who This Book is For
Video game enthusiasts interested in game development and design. No prior programming experience is required.

CHAPTER 1: Overview
GOALS This chapter will introduce the content of the book and its goals, then will do a little introcution to programming, GameMaker Studio 2, the interface of the software, how to download and install it.

CHAPTER 2: Hello World
GOALS: This chapter will introduce GMS2 and the main concepts around programming and software development via a simple hello world project.

CHAPTER 3: Memory (part 1)
GOALS: Covering the complete design of the game and the implementation of the first half of it.
Topics covered are: an introduction to game design documents, arrays, data structures, loops, functions, scripts and the implementation of the first part of the game (creating the deck of cards, shuffling and positioning cards in the room, flipping cards via the click of the mouse)

CHAPTER 4: Memory (part 2)
GOALS: Finishing the development of the game, plus considerations on game design and how to make a game fun.
Topics covered are: game logic, victory conditions, timers and time-based tasks, texts and GUI, fun factor in a video game, game design considerations.

CHAPTER 5: 1942 (Part 1)
GOALS: Covering the design and first part of the implementation of an endless vertical shooter based on the famous Z80 classic by Capcom, 1942.
Introducing vertical scrolling, arrow-keys movements, bullet system, enemies, score and explosions.

CHAPTER 10: Designing Platformers
GOALS: This chapter will analyse the history of platformer and how they evolved in the years. Considerations about how to make a platformer fun and challenging will be the main topic of the chapter. There will be in-depth analysis of masterpieces of the genre like Super Mario Bros and Spelunky.

CHAPTER 11: CottageVania (part 1)
GOALS: Design and implementation of a metroidvania, building on the concepts covered in chapters 7 and 8. Covering the first half of the implementation of the game creating a platformer (like the one in chapter 7 and 8) and enhancing it with stats and different attacks.

CHAPTER 13: Designing Metroidvania
GOALS: Talking about metroidvania and the importance they have in the game industry. How they became one of the most wanted game genre and one of the most appreciated.
What makes a metroidvania good? Examples on real life games (Metroid, Castlevania, Hollow Knight, etc)

CHAPTER 14: What's next?
GOAL: How to progress learning and publishing your game on digital stores (steam, gog, etc.)