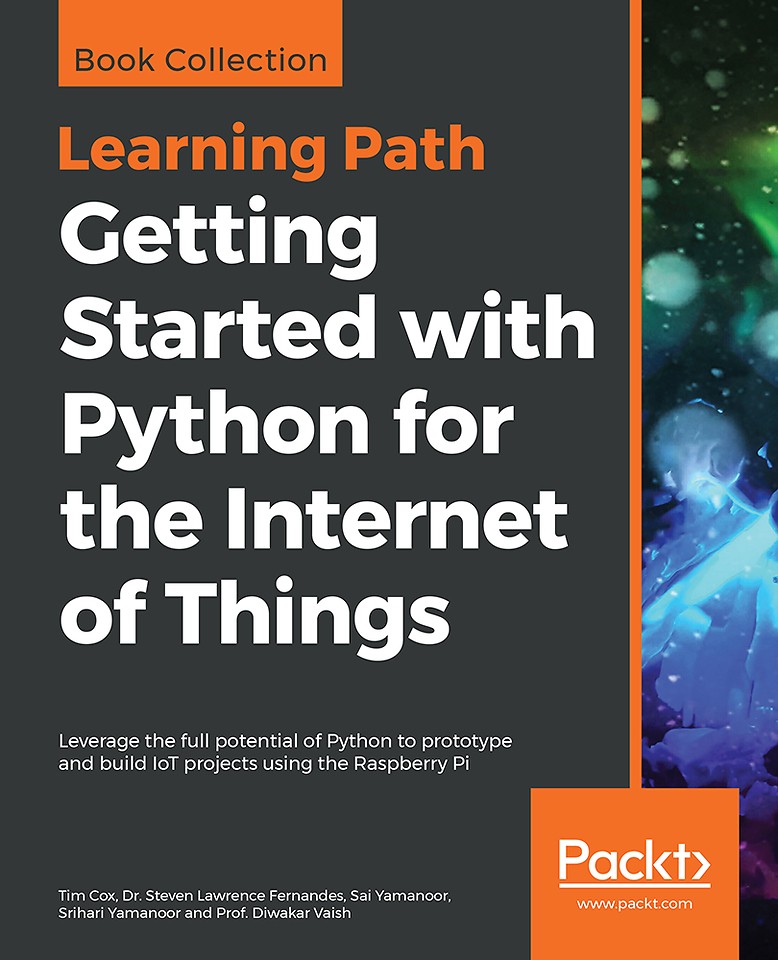 Getting Started with Python for the Internet of Things

This Learning Path takes you on a journey in the world of robotics and teaches you all that you can achieve with Raspberry Pi and Python.

It teaches you to harness the power of Python with the Raspberry Pi 3 and the Raspberry Pi zero to build superlative automation systems that can transform your business. You will learn to create text classifiers, predict sentiment in words, and develop applications with the Tkinter library. Things will get more interesting when you build a human face detection and recognition system and a home automation system in Python, where different appliances are controlled using the Raspberry Pi. With such diverse robotics projects, you'll grasp the basics of robotics and its functions, and understand the integration of robotics with the IoT environment.

Tim Cox works as a software engineer and is passionate about programming. He holds a bachelor's degree in electronics and electrical engineering and has a rich career in developing embedded software for a range of industries. To support the vision behind the Raspberry Pi and to encourage a new generation of engineers, Tim co-founded the MagPi magazine (the official magazine for the Raspberry Pi). He also produces electronic kits through his site PiHardware.

Dr. Steven Lawrence Fernandes holds a bachelor's degree in electronics and communication engineering, a master's degree in microelectronics, and a Ph.D. in computer vision and machine learning. His Ph.D work "Match composite sketch with drone images" has received patent notification (Patent Application Number: 2983/CHE/2015). has post the doctoral research experience working in deep learning at the University of Alabama at Birmingham, USA. He received the prestigious US award from the Society for Design and Process Science for his outstanding service contributions in 2017 and Young Scientist Award by Vision Group on Science and Technology in 2014. He has also received a research grant from the Institution of Engineers.

Sai Yamanoor is an embedded systems engineer working for a private startup school in the San Francisco Bay Area, where he builds devices that help students achieve their full potential. He completed his undergraduate work in mechatronics engineering from Sri Krishna College of Engineering and Technology, Coimbatore, India and his graduate studies in mechanical engineering at Carnegie Mellon University, Pittsburgh PA. His interests, deeply rooted in DIY and open software and hardware cultures, include developing gadgets and apps that improve the quality of life, Internet of Things, crowdfunding, education, and new technologies. In his spare time, he plays with various devices and architectures, such as the Raspberry Pi, Arduino, Galileo, Android devices and others. Sai has earlier published a book titled Raspberry Pi Mechatronics Projects.

Prof. Diwakar Vaish is a robotics scientist and the inventor of Manav, India's first indigenous humanoid robot. He has invented the world's first mind-controlled wheelchair, brain cloning, and the world's cheapest ventilator. He has also been a guest lecturer at over 13 IITs and various other institutions. He is the founder of A-SET Robotics, a leading robotics research company based in New Delhi.

Getting Started with Python for the Internet of Things