Van Gogh in The Hague

Experience Van Gogh in The Hague

Vincent van Gogh (1853-1890) was one of the most extraordinary and brilliant artists of the nineteenth century. The year 2019 will mark the 150th anniversary of his having taken up residence in The Hague. He lived and worked longer in The Hague (1869-1873 and 1881-1883) than anywhere else during his adult life. The details of his time in The Hague are fas- cinating and yet virtually unknown. Van Gogh owed much to The Hague and its artists for both his artistic and cultural development. His nineteenth century world was at the crossroads of old and new and no artist depicts the poignant class differences, the in- dustrialisation and the expansion of the city as vividly as Van Gogh. He was not only inspired by the city, but also by Scheveningen and by the rural surroundings of Rijswijk, Voorburg, and Leidschendam.
This book is the result of extensive research done by art historian F.W. Hofstra, MA in recent years. New locations and new insights have been incorporated in the book, as well as an in-depth discussion of Van Gogh at the beginning of his artistic career and a look at the workshop practices of the nineteenth century.
Vincent Van Gogh’s story is told in conjunction with the various locations where he lived and worked, connecting these locations with letters and works of art. The reader can view the catalogue numbers on their own or by traveling from location to location on foot, by boat or by bicycle. 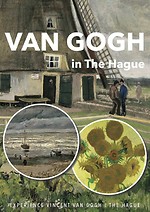 Van Gogh in The Hague