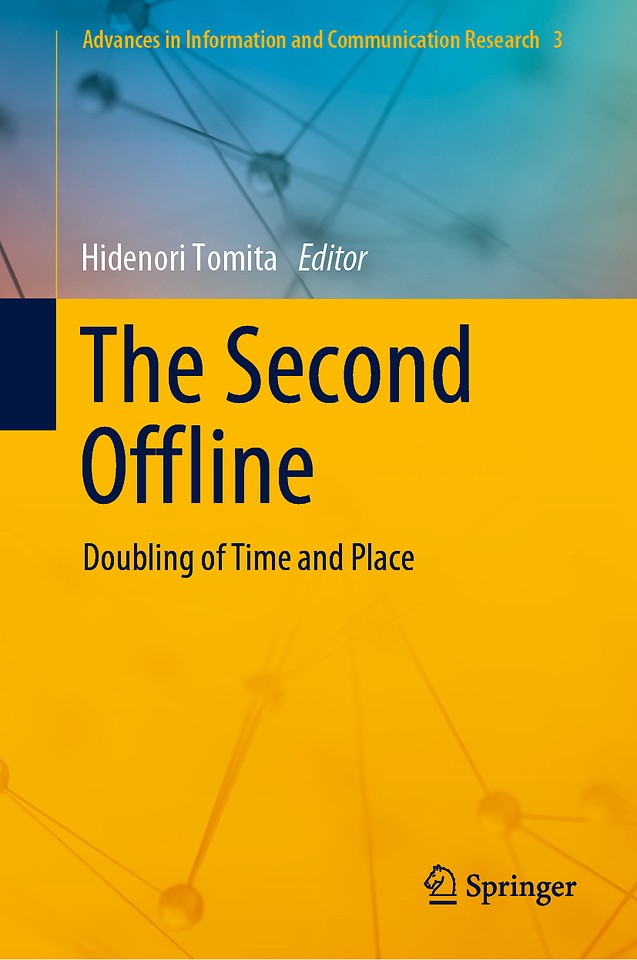 Doubling of Time and Place

This book presents current research on mobile Internet society. Past research was not able to show a clear analytical framework, thus was unable to close in on the fundamental changes in that society. This book, however, analyzes mobile Internet society by introducing the concept of “doubling of time and place” and the analytical framework of the “second offline.” The emergence of the smartphone has made Internet use easier, and now, people are constantly using online information in the midst of their daily lives. Our society is transitioning from the first offline society, a society without being connected to Internet, to the second offline society, where users are connected to the Internet at all times. In this second offline society, our sense of time and place are beginning to change. Broadcast and communication media have made possible the overlapping of different places, which has been called the doubling of place. Furthermore, virtual reality (VR) and augmented reality (AR) technologies have enabled the overlap of different times, which this book calls the doubling of time. The smartphone makes both possible. With the second offline and the doubling of time and place as keywords, the book takes into consideration research that includes, among other topics, the media usage of young adults, selfies, education, social media usage, mobile games, work stations, and consumer activity in the mobile Internet society.

1. Are You Second Offline?: The Doubling of Place and Time.- 2. Mobile Communication Technology and the Life-World: Examining the Implications of the Second Offline Concept from a Phenomenological Perspective.- Part 1 Society Transformed through Mobile Media.- 3. Merged Reality: A second “Second Offline”.- 4. Application of XR to Regional Development.- 5. Media Mobilization and the Bricolage of Time and Place.- 6. Possibility of participatory design on mobile media.- 7. Workation and the Doubling of Time and Place: Topophilia and Nowstalgia.- Part 2 Mobile Media as a Cultural Milieu.- 8. Ambient Play: Understanding Mobile Games in Everyday Life.- 9. Re-Genesis of ‘Now’ by Parasites’ Interruptions/Advents: Mobile Media Solipsist and the Re-Enchanted ‘Possible Worlds’.- 10. The Importance of Place in the Second-Offline Life: Geographical Differences in Social Media Usage and Online Gaming Behavior.- 11. The Impact of Emerging Media on Education and Teaching Methods.- 12. Gazing at Oneself: the Bodily Mode of the Selfie.- Part 3 Social Media and Mobile Society.- 13. Spatial Practices of the Second Offline.- 14. Carrying relationships: city, social network, mobile media.- 15. Social media use and Translocality amoung Japanese young adults.- Index.