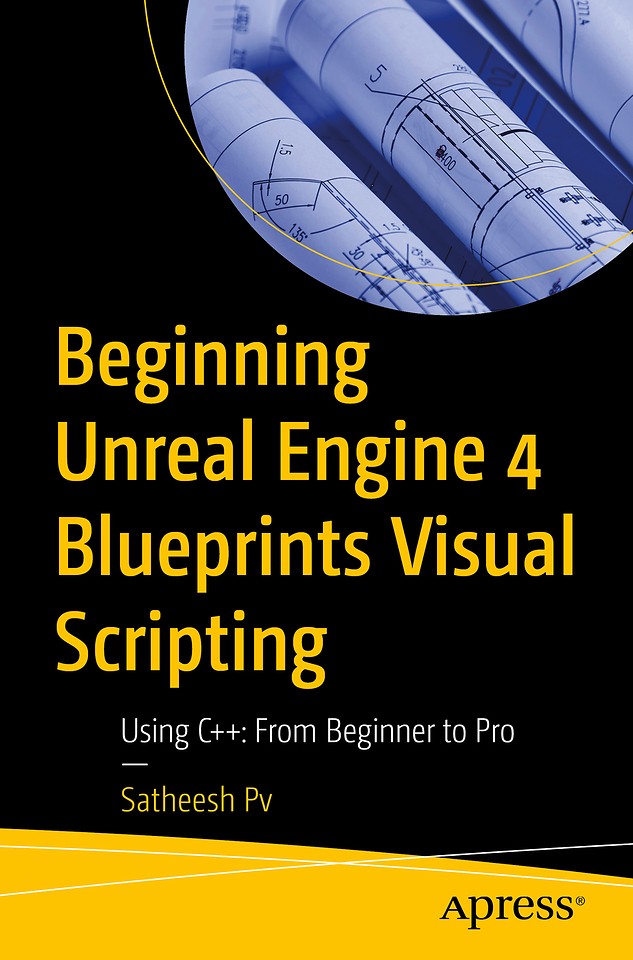 Using C++: From Beginner to Pro

Discover how Unreal Engine 4 allows you to create exciting games using C++ and Blueprints. This book starts with installing, launching, and examining the details of Unreal Engine.
Next, you will learn about Blueprints and C++ and how to leverage them. The following chapters talk in detail about gameplay, basic physics, and ray-casting for game development in Unreal Engine. Furthermore, you’ll create material, meshes, and textures.
The last chapter brings all the concepts together by building a demo game. By the end of the book, you’ll be equipped with the know-how and techniques needed to develop and deploy your very own game in Unreal Engine.

Who This Book Is For
Beginners interested in learning Blueprints visual scripting and C++ for programming games in Unreal Engine 4 would find this book useful.

Chapter 1: Introduction to Unreal Engine 4Chapter Goal: The reader is given a brief introduction to Unreal Engine 4 and how to get both binary version and source code version of the Engine. After installing the Engine, we will create a sample project from one of the given templates and learn about the Unreal Editor and its various settings.Sub -Topics1. Getting Unreal Engine by Epic Games Launcher2. Getting Unreal Engine from GitHub and compiling3. Getting to know more about Unreal Editor
Chapter 2: Introduction to BlueprintsChapter Goal: This is an introduction to the visual scripting language of Unreal Engine 4 called Blueprints. The reader will learn about what are Blueprints, the various types of Blueprints, and how to create and use it in a game.Sub - Topics 1. What are Blueprints?2. Blueprint types3. Creating a sample Blueprint
Chapter 3: C++ and Unreal EngineChapter Goal: C++ is a powerful language, and in Unreal Engine 4, it is of no exception. In this chapter, we will go through the basics of Unreal C++ by creating C++ classes and accessing various properties and functions in Blueprint and communicating between these two powerful tools.Sub - Topics: 1. Creating a new C++ class2. Exposing variables and functions to Blueprints3. Calling C++ functions in Blueprints
Chapter 4: Gameplay FrameworkChapter Goal: Introduction to various important gameplay classes that actually make a game. The reader will learn about how to get input from the player and show data to the user through HUD.Sub - Topics: 1. Gameplay classes2. Creating character and controller classes to get input from player3. Show relevant data to the player through user interface
Chapter 5: Basic Physics and RaycastingChapter Goal: Physics is one of the main driving forces behind any game. If you want to interact with an object in the world or to destroy something in the game world, you need raycasting and physics. In this chapter, the reader will learn how to raycast and pickup an item as well as shoot and destroy something in the world.Sub - Topics: 1. Physics and raycasting2. Using raycasting to pick up an item3. Using physics to destroy something in the game world
Chapter 6: Importing Meshes, Textures, and Creating MaterialsChapter Goal: In this chapter, readers will be introduced to the concept of materials and how to create and use them as well as creating instances to modify the material quickly. The reader will also learn how to import a custom 3D models and textures.Sub - Topics: 1. Importing meshes and textures2. Material types3. Creating material and material instances4. Modifying the material at runtime using Blueprints and C++
Chapter 7: Project: Demo GameChapter Goal: Using all the above knowledge, we will create a sample game and package it.Sub - Topics: 1. Sample game using Blueprints and C++