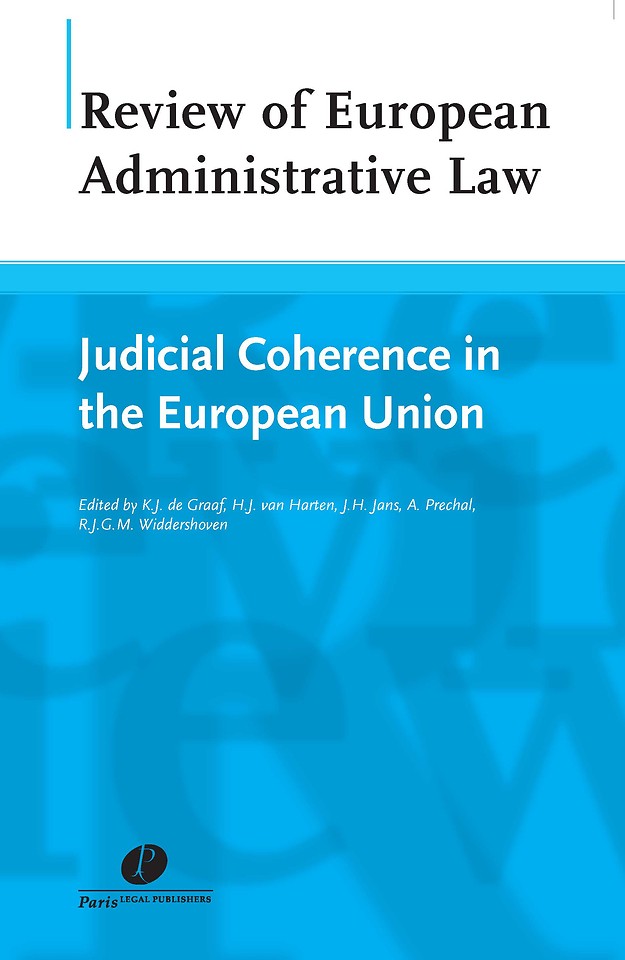 Judicial Coherence in the European Union

This book provides a selection of interesting papers presented at the Third REALaw Research Forum, which was held in Utrecht on January 30, 2015. The overarching theme of the colloquium was Judicial Coherence in the European Union.

Ever since the establishment of the EU’s judicial system, coherence in the administration of justice within the EU has been an intriguing topic for debate amongst legal scholars and practitioners. Throughout the development of EU (administrative) law in recent decades, courts have been major players in shaping the EU legal order in law and practice. In the overwhelming majority of cases in everyday EU legal practice, national courts and tribunals fulfil the duty of ensuring that the law is observed in the interpretation and application of EU law. Recent judgments clearly illustrate that judicial coherence in the EU concerns a shared responsibility of the Court of Justice and the courts in the Member States. Between the lines, anticipation of the growing horizontal interaction between national courts of the EU Member States can be observed.

The variety, richness and refreshing approaches to questions relating to judicial coherence in the European Union in this book prove that judicial coherence deserves to be further explored and discovered and is of great societal relevance as well.

The Borelli Doctrine Revisited: Three Issues of Coherence in a Landmark Ruling for EU Administrative Justice – Filipe Brito Bastos
1 Introduction: Three Issues of Coherence
2 Borelli: the Facts and the Doctrine. The Jurisdictional and the Substantive Borelli Principles
3 The Versatility and the Scope of the Borelli Doctrine
4 Defending the Coherence of Borelli with the Broader Scenario of EU Constitutional Law
5 The Coherence of the Borelli Doctrine with the Court’s Case Law on the Reviewability of Intermediate Measures
6 Conclusion: Coherence Between Administrative Reality and the Dualistic System of Judicial Protection?

Lufthansa and the Coherent Application of State Aid Law: What is the Role of National Judges in Concurrent Proceedings? – Carlo Maria Colombo
1 Introduction
2 Lufthansa and its Predecessors: Towards a Coherent List of Remedies in Case of Simultaneous Proceedings on the Same Aid Measures
3 The Complementary Role of National Courts in Case of Commission Peliminary Decisions: did the CJEU Misinterpret the Principles of EU Law in Lufthansa?
3.1 Facts and Ruling
3.2 Some Prima Facie Criticisms (…)
3.3 (…) that are unjustified. The ‘effective’ Competences of Domestic Courts in the Light of the Principles Framing EU Law
4 Does the Application of Lufthansa Lead to a Coherent Enforcement of State Aid Rules by National Judges?
4.1 Order to Suspend Payment, Recovery and Interim Measures: Timing and Evidence Issues in Domestic Litigations
4.2 The Limited Support Offered by the Commission and by the Preliminary Reference to the CJEU
5 To Conclude

Judicial Coherence in the European Union