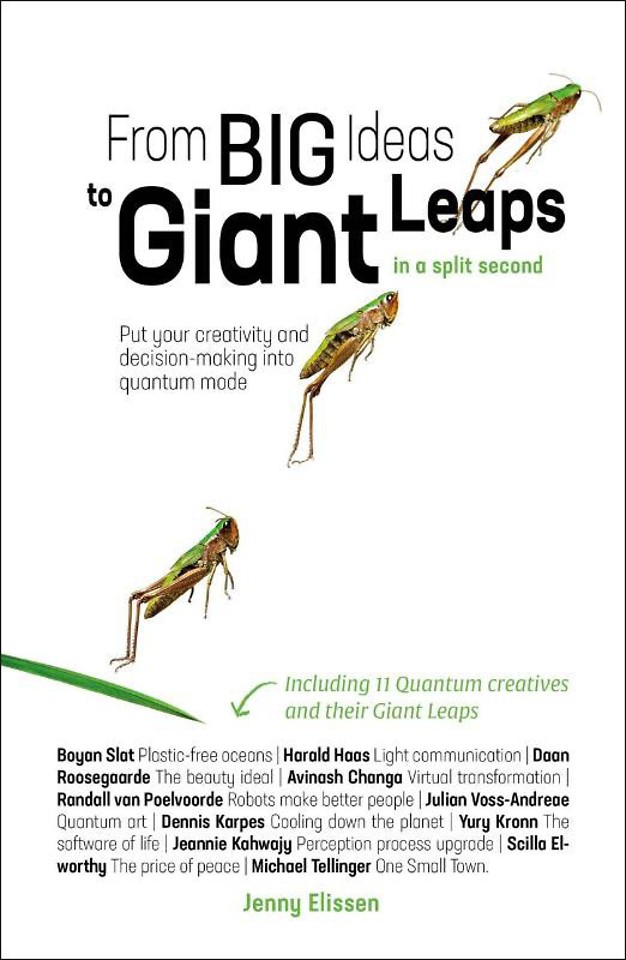 From Big Ideas to Giant Leaps - in a split second

Put your creativity and decision-making into quantum mode

Big Ideas have conquered the world. New products, services and concepts were able to reach the heads and hearts of large groups of people ever better and ever more quickly. But what used to be Big Ideas are currently not much more than ‘less bad’ designs: changes, yes, but hardly improvements. We react to that which already exists and stumble along behind the consequences of our decisions. What the world really needs are Giant Leaps: quantum leaps.

In 'From Big Ideas to Giant Leaps', Jenny Elissen introduces a new way of looking at reality. She describes how we can effortlessly take decisions which feel right and use our transformative creativity to really help the world advance. What’s the added bonus? We’re designing for the whole world. Everyone is involved, everyone participates.

Including 11 Quantum creatives and their Giant Leaps.

Part 1: Playing with reality
'Before coffee the ideas' - Brainstorming our way to Big Ideas
Thinking in dilemmas - How and why problems occur
Master of mimicry - The origins of deceptions lie in nature
The guru's deception - Identity correction
Fuck sneakers - The marketing game
The ideology of reality - Pretending and the importance of boundaries

Part 2: Thinking about reality
WYSIATI - The illusion of truth
Quantum reality - The limit of pour imagination
The ballet mécanique - The value of serendipity
Room - Head, heart and gut

Part 3: Changing reality
Recreating the future - How the future influences the past
Perfect world principle - Creating a new reality
The principle of self-organization - The path to effortless decisions and creativity
Call to action - Creativity and decision-making in quantum mode
To the horizon - (Staying on) the right path

Manifesto of the quantum leap - Congratulations, we made it!

About the author
Bibliography
Index

From Big Ideas to Giant Leaps - in a split second