A True Story of Building Leaders by Breaking the Rules

"I don't know of a finer model of this kind of empowering leadership than Captain Marquet." (Stephen R. Covey).

'Turn the Ship Around!' is the gripping story of the USS Santa Fe - a nuclear submarine dogged by poor morale, poor performance, and the worst retention rate in the fleet - until David Marquet took command.

Captain Marquet took the ship from worst to best in its class by challenging the US Navy's traditional leader-follower approach. Instead, he gave up as much control and decision-making as possible to his team, creating a new framework he calls 'leader-leader'. Marquet shows how he struggled against his instincts to take control, and how the effort paid off far more dramatically than he ever imagined.

No matter your business or position, you can apply Marquet's approach to create a workplace where everyone takes responsibility for their actions, people are healthier and happier and everyone is a leader.

Turn the Ship Around!
Henny Portman | 18 september 2018
In this business novel – Turn the ship around! A true story of turning followers into leaders – the author David Marquet shows you his journey as Captain on the nuclear submarine USS Santa Fe.
Lees verder

Part 4: Clarity
21. Under Way for Deployment
22. A Remembrance or War
23. Leadership at Every Level
24. A Dangerous Passage
25. Looking Ahead
26. Combat Effectiveness
27. Homecoming
28. A New Method of Resupplying
29. Ripples

Afterword: Where Are They Now?
Glossary: Technical Terms, Slang, and Military Jargon
Notes 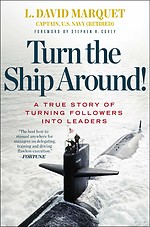 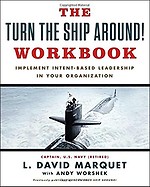