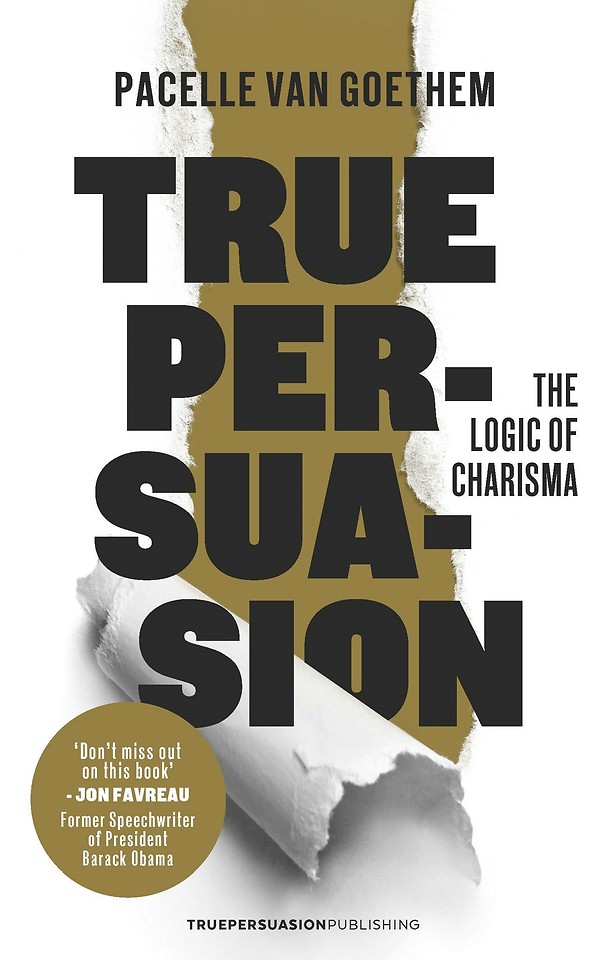 The logic of charisma

Having charisma and changing people’s minds - The definitive guide

Finally, just when we all thought that persuasion and charisma are only for those blessed with some magical gene or are simply a matter of pushing the right buttons, along comes a book that provides a jaw-dropping explanation of how persuasion and charisma actually work. Based on massive research. Used and recommended by people we all admire. The logical how-to guide that will make you and your message irresistible.

Time to dispel some myths. This book might make us rethink everything we thought we knew about persuasion.

- Revealing the secret: How persuasion works in the brain
- You’ve got it in you, why not use it: Keys to effortless charisma
- Your ideas should be heard: Tactics of world leaders (and our children)

Drs. Pacelle van Goethem MSc is regarded by many as the foremost authority on persuasion and charisma in the Netherlands, international speaker and highly sought-after coach. True Persuasion is the international edition of her book ‘IJs verkopen aan Eskimo’s’, which is considered to be the standard on persuasion in the Netherlands. It has attained everseller status, with over 23 editions sold since it was first published.

'Don’t miss out on this book' - John Favreau, Former Director of Speechwriting for President Barack Obama

PART 1 INFLUENCE & PERSUASION
Chapter 1 How does persuasion work?
1.1 Irrationality and obedience
1.2 Persuasion and the brain
Chapter 2 The Model of Influence
2.1 The Model of Infuence©
2.2 Why the best idea doesn’t always come out on top

PART 2 STRATEGY FOR PERSUASION
Chapter 3 Choosing the right approach
3.1 Critical success factors for persuasion
3.2 Spock on your shoulder
3.3 The Model of Persuasion©

PART 3 BEING CHARISMATIC
Chapter 4 Personal charisma
4.1 The styles of persuasion©
4.2 Your style
4.3 Why we are sometimes persuasive and sometimes not
4.4 Pros and cons of the 3 styles
4.5 Improving your persuasive power

Chapter 5 Persuade as an Authority©
Being a King
5.1 Resolute
Thatcher’s Law & Trumps’ Success
5.2 Consistent
Ramsay’s Law
5.3 A Leader’s Charisma
Being a King©

Chapter 7 Persuade as a Role Model©
The Tao of Top Gear
7.1 Being unique
The Starbucks Standard
7.2 Being courageous
How fast can I go in this Murcielago
7.3 Sense of perspective
Clarkson’s Law

Chapter 11 Persuasive language
Favreau’s Law
11.1 A1 Storytelling
Speak through Stories (Jon Favreau)
11.2 Adjusting to cognitive styles
You will only see it when you get it (Johan Cruyf)
11.3 Language hypnosis
You can dance to a good speech (Renée Broekmeulen)