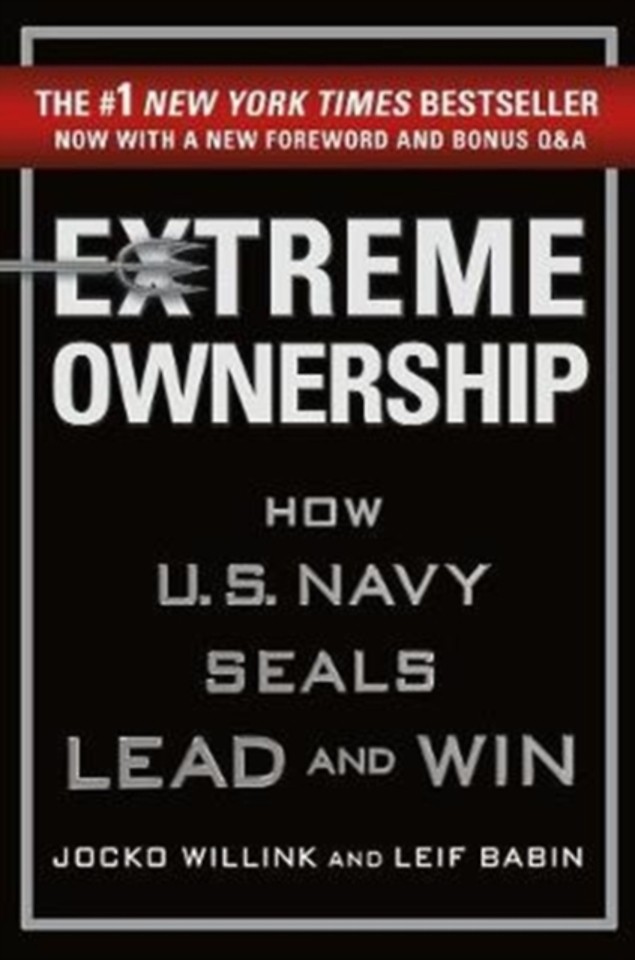 JOCKO WILLINK is author of Extreme Ownership, a decorated retired Navy SEAL officer, and co-founder of Echelon Front, where he is a leadership instructor, speaker, and executive coach.

An updated edition of the blockbuster bestselling leadership book that took America and the world by storm, two U.S. Navy SEAL officers who led the most highly decorated special operations unit of the Iraq War demonstrate how to apply powerful leadership principles from the battlefield to business and life.

Combat, the most intense and dynamic environment imaginable, teaches the toughest leadership lessons, with absolutely everything at stake. Jocko Willink and Leif Babin learned this reality first-hand on the most violent and dangerous battlefield in Iraq. As leaders of SEAL Team Three’s Task Unit Bruiser, their mission was one many thought impossible: help U.S. forces secure Ramadi, a violent, insurgent-held city deemed “all but lost.” In gripping, firsthand accounts of heroism, tragic loss, and hard-won victories, they learned that leadership—at every level—is the most important factor in whether a team succeeds or fails.

Willink and Babin returned home from deployment and instituted SEAL leadership training to pass on their harsh lessons learned in combat to help forge the next generation of SEAL leaders. After leaving the SEAL Teams, they launched a company, Echelon Front, to teach those same leadership principles to leaders in businesses, companies, and organizations across the civilian sector. Since that time, they have trained countless leaders and worked with hundreds of companies in virtually every industry across the U.S. and internationally, teaching them how to develop their own high-performance teams and most effectively lead those teams to dominate their battlefields.

Since it’s release in October 2015, Extreme Ownership has revolutionized leadership development and set a new standard for literature on the subject. Required reading for many of the most successful organizations, it has become an integral part of the official leadership training programs for scores of business teams, military units, and first responders. Detailing the mindset and principles that enable SEAL units to accomplish the most difficult combat missions, Extreme Ownership demonstrates how to apply them to any team or organization, in any leadership environment. A compelling narrative with powerful instruction and direct application, Extreme Ownership challenges leaders everywhere to fulfill their ultimate purpose: lead and win.

JOCKO WILLINK is author of Extreme Ownership, a decorated retired Navy SEAL officer, and co-founder of Echelon Front, where he is a leadership instructor, speaker, and executive coach. Jocko spent 20 years in the U.S. Navy SEAL Teams, starting as an enlisted SEAL and rising through the ranks to become a SEAL officer. As commander of SEAL Team Three's Task Unit Bruiser during the battle of Ramadi, he orchestrated SEAL operations that helped the "Ready First" Brigade of the US Army's First Armored Division bring stability to the violent, war-torn city. Task Unit Bruiser became the most highly decorated Special Operations Unit of the Iraq War. Jocko returned from Iraq to serve as Officer-in-Charge of training for all West Coast SEAL Teams. There, he spearheaded the development of leadership training and personally instructed and mentored the next generation of SEAL leaders who have continued to perform with great success on the battlefield. During his career, Jocko was awarded the Silver Star, the Bronze Star, and numerous other personal and unit awards. In 2010, Jocko retired from the Navy and launched Echelon Front where he teaches the leadership principles he learned on the battlefield to help others lead and win. Clients include individuals, teams, companies, and organizations across a wide-range of industries and fields.

Leif Babin is author of Extreme Ownership, a decorated former Navy SEAL officer, and co-founder of Echelon Front, where he serves as leadership instructor, speaker, and executive coach. A graduate of the U.S. Naval Academy, Leif served thirteen years in the Navy, including nine as a Navy SEAL. As a SEAL platoon commander in SEAL Team Three's Task Unit Bruiser, he planned and led major combat operations in the Battle of Ramadi that helped the "Ready First" Brigade of the US Army's 1st Armored Division bring stability to the violent, war-torn city. Task Unit Bruiser became the most highly decorated special operations unit of the Iraq War. Leif returned from combat as the primary leadership instructor for all officers graduating from the SEAL training pipeline. There, he reshaped SEAL leadership training to better prepare SEAL officers for the immense challenges of combat. During his last tour, Leif served as Operations Officer and Executive Officer at a SEAL Team where he again deployed to Iraq with a Special Operations Task Force. He is the recipient of the Silver Star, two Bronze Stars, and a Purple Heart. In 2011, Leif left active duty and co-founded Echelon Front, a leadership consulting company that helps others build their own high-performance winning teams. Clients include individuals, companies, and organizations across a wide-range of industries. Leif speaks on leadership, U.S. military strategy, and foreign policy matters. His editorials have been published in the Wall Street Journal and he has appeared on a variety of national television news and radio programs.