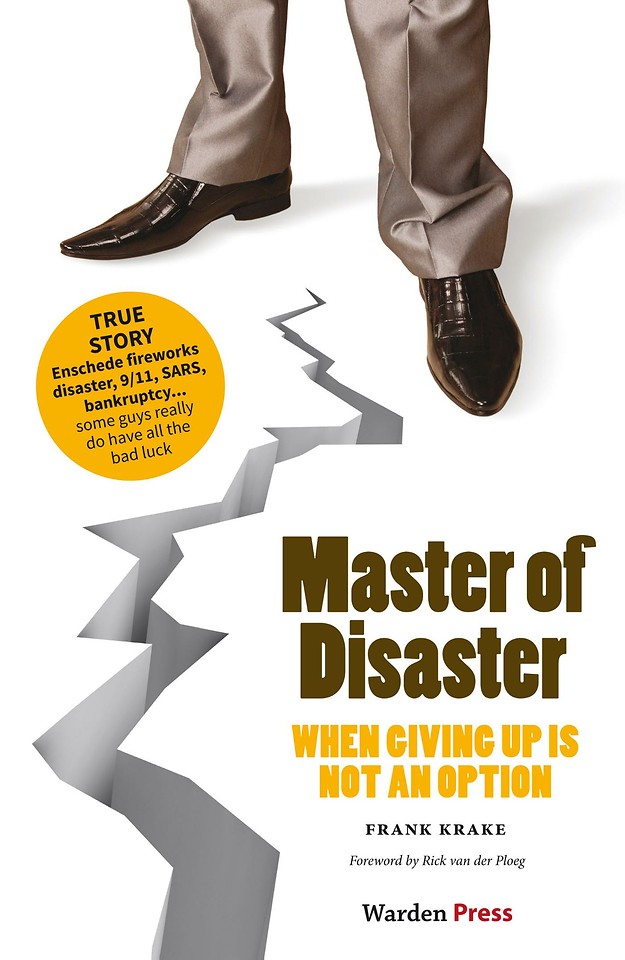 When giving up is not an option

This book tells the unbelievable story of "Master of Disaster" Frank Krake, and his experiences after becoming the director of the struggling patio furniture giant, Unimeta. In his ambitious attempts to make the company a success, he is continuously plagued by setbacks: A firework disaster destroys the company's entire inventory when the resulting massive explosion blows the warehouse and its contents to smithereens. Resulting in the death of 23 people and the injuries of over 1,000 others, this catastrophe drives the young director to test the limits of his abilities.

9/11 thwarts the company's American adventure when Frank is in the air during the attacks. On a flight headed towards America, his plane is being suspected as being another plane involved in the attacks. Just a little over a year later, Frank is in the heart of the region in China where the SARS epidemic has broken out. Suddenly, people are becoming infected and dying all around him.
Bankrupt suppliers also push the company to the edge of the precipice. Frank also faces struggles at company headquarters when his English sales rep dies a tragic death, and a male employee undergoes a sex change. And while all this is going on, the bank continues to step up the pressure.
It seems impossible that one man can be the victim of so much misfortune. And yet, 'Master of Disaster' is a true story, a tale of resilience and perseverance.

After all, for Frank, giving up is not an option. Time after time, he manages to save the company from certain ruin, thanks to what can only be described as superhuman efforts, until after many years, the inevitable happens. Even then, Franks refuses to throw in the towel. He's determined to pull out all the stops, one more time, and come out winning.